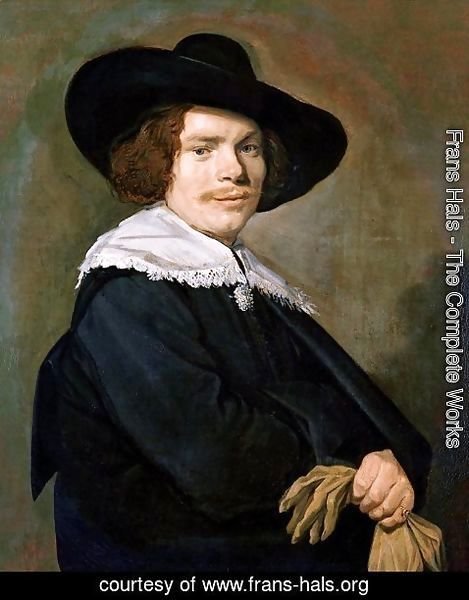 Frans Hals was born in 1580 or 1581, in Antwerp. Like many, Hals' family emigrated from the Spanish Netherlands to Haarlem In 1585-the year of the Fall of Antwerp-where he lived for the remainder of his life. Hals studied under another Flemish-émigré, Karel van Mander (1548-1606), whose Mannerist influence, however, is not noticeably visible in his work. Afterwards, at the age of 27, he became a member of the city's Guild of Saint Luke. The earliest known example of Hals' art is the 1611, Jacobus Zaffius. His 'breakthrough' came in 1616, with the life-size group portrait, The Banquet of the Officers of the St George Militia Company.

Historians have erroneously reported that he mistreated his first wife, Anneke Hermansz (Annetje Harmensdochter Abeel), based on records that a Frans Hals was charged with spousal abuse in Haarlem in 1616. However, as Seymour Slive has pointed out, the Frans Hals in question was not the artist, but another Haarlem resident of the same name. Indeed, at the time of these charges, the artist had no wife to mistreat as Anneke had died earlier in 1616. Similarly, historical accounts of Hals' propensity for drink have been largely based on embellished anecdotes of his early biographers, namely Arnold Houbraken, with no direct evidence existing documenting such. In 1617, already with two children by Anneke, he married Lysbeth Reyniers in Spaarndam, a small village outside the Haarlem. They had eight children.

Although Hals' work was in demand throughout his life, he experienced financial difficulties. In addition to painting, he worked as an art dealer and restorer. His creditors took him to court several times, and to settle his debt with a baker in 1652 he sold his belongings. The inventory of the property seized mentions only three mattresses and bolsters, an armoire, a table and five pictures. Left destitute, the municipality gave him an annuity of 200 forms in 1664.

At a time when the Dutch nation fought for independence, Hals appeared in the ranks of the schutterij, a military guild. He was also a member of a local chamber of rhetoric, and in 1644 chairman of the Painters Corporation at Haarlem.

Frans Hals died in Haarlem in 1666 and was buried in the city's St. Bavo Church. His widow later died obscurely in a hospital after seeking outdoor relief from the guardians of the poor. 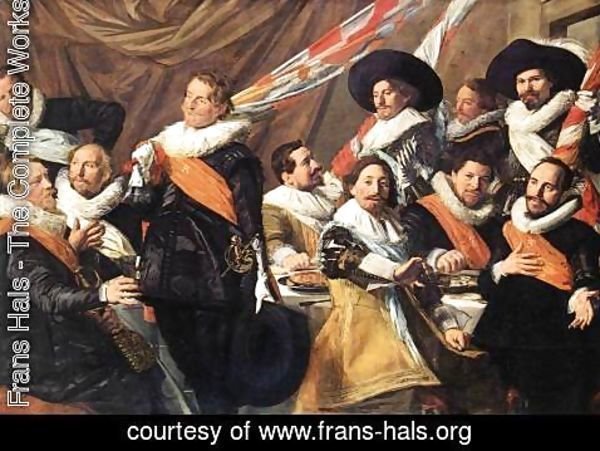 Hals is best known for his portraits, mainly of wealthy citizens, like Pieter van den Broecke and Isaac Massa, whom he painted three times. He also painted large group portraits, many of which showed civil guards. He was a Baroque painter who practiced an intimate realism with a radically free approach. His pictures illustrate the various strata of society; banquets or meetings of officers, sharpshooters, guildsmen, admirals, generals, burgomasters, merchants, lawyers, and clerks, itinerant players and singers, gentlefolk, fishwives and tavern heroes.

In group portraits, such as the Archers of St. Hadrian, Hals captures each character in a different manner. The faces are not idealized and are clearly distinguishable, with their personalities revealed in a variety of poses and facial expressions.

He studied under the painter and historian Karel van Mander (Hals owned some paintings by van Mander that were amongst the items sold to pay his bakery debt in 1652). He soon improved upon the practice of the time, as exemplified by Jan van Scorel and Antonio Moro, and gradually emancipated himself from traditional portrait conventions.

Hals was fond of daylight and silvery sheen, while Rembrandt used golden glow effects based upon artificial contrasts of low light in immeasurable gloom. Both men were painters of touch, but of touch on different keys - Rembrandt was the bass, Hals the treble. Hals seized, with rare intuition, a moment in the life of his subjects. What nature displayed in that moment he reproduced thoroughly in a delicate scale of color, and with mastery over every form of expression. He became so clever that exact tone, light and shade, and modeling were obtained with a few marked and fluid strokes of the brush.

The only record of his work in the first decade of his independent activity is an engraving by Jan van de Velde copied from lost portrait of The Minister Johannes Bogardus. Early works by Hals, such as Two Boys Playing and Singing and a Banquet of the Officers of the St Joris Doele or Arquebusiers of St George (1616), show him as a careful draughtsman capable of great finish, yet spirited withal. The flesh he painted is pastose and burnished, less clear than it subsequently became. Later, he became more effective, displayed more freedom of hand, and a greater command of effect. 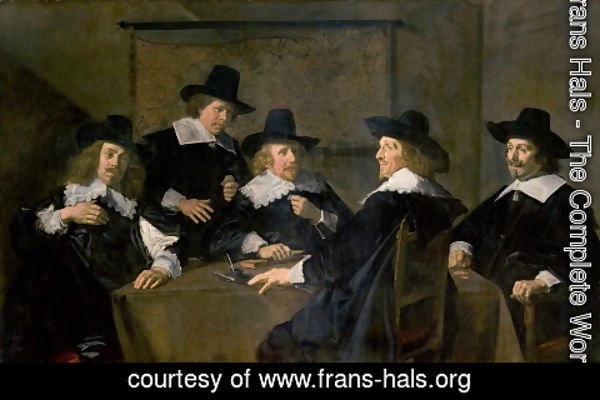 From 1620 till 1640 he painted many double portraits of married couples, on separate panels, the man on the left panel, his wife at his right. Only once did Hals portray a couple, Isaac Massa and his wife on a single canvas: Double Portrait of a Couple, (c. 1623, Rijksmuseum Amsterdam).

His style changed throughout his life. Paintings of vivid color were gradually replaced by pieces where one color dominated. After 1641 he showed a tendency to restrict the gamut of his palette, and to suggest color rather than express it. Later in his life darker tones, even with much black, took over. His brush strokes became looser in later years, fine detail becoming less important than the overall impression. Where his earlier pieces radiated gaiety and liveliness, his later portraits emphasized the stature and dignity of the people portrayed. This austerity is displayed in Regentesses of the Old Men's Alms House and The Regents and Regentesses of the Oudemannenhuis (c. 1664), which are masterpieces of color, though in substance all but monochromes. His restricted palette is particularly noticeable in his flesh tints, which from year to year became more grey, until finally the shadows were painted in almost absolute black, as in the Tymane Oosdorp.

As this tendency coincides with the period of his poverty, some historians have suggested that a reason for his predilection for black and white pigment was the low price of these colors as compared with the costly lakes and carmines.

As a portrait painter Hals had scarcely the psychological insight of a Rembrandt or Velazquez, though in a few works, like the Admiral de Ruyter, the Jacob Olycan, and the Albert van der Meer paintings, he reveals a searching analysis of character which has little in common with the instantaneous expression of his so-called character portraits. In these, he generally sets upon the canvas the fleeting aspect of the various stages of merriment, from the subtle, half ironic smile that quivers round the lips of the curiously misnamed Laughing Cavalier to the imbecile grin of the Malle Babbe. To this group of pictures belong Baron Gustav Rothschilds Jester, the Bohemienne and the Fisher Boy, whilst the Portrait of the Artist with his Second Wife, and the somewhat confused group of the Beresteyn Family at the Louvre show a similar tendency. Far less scattered in arrangement than this Beresteyn group, and in every respect one of the most masterly of Hals' achievements is the group called The Painter and his Family, which was almost unknown until it appeared at the winter exhibition at the Royal Academy in 1906.

Many of Hals' works have disappeared, but it is not known how many. According to the most authoritative present day catalogue, compiled by Seymour Slive in 1970-1974 (Slive's last great Hals exhibition catalogue followed in 1989), another 222 paintings can be ascribed to Hals. Another authority on Hals, Claus Grimm, believes this number to be lower (145) in his Frans Hals. Das Gesamtwerk (1989).

It is not known whether Hals ever painted landscapes, still lifes or narrative pieces, but it is unlikely. Many artists in the 17th century in Holland opted to specialise, and Hals also appears to have been a pure portrait specialist. 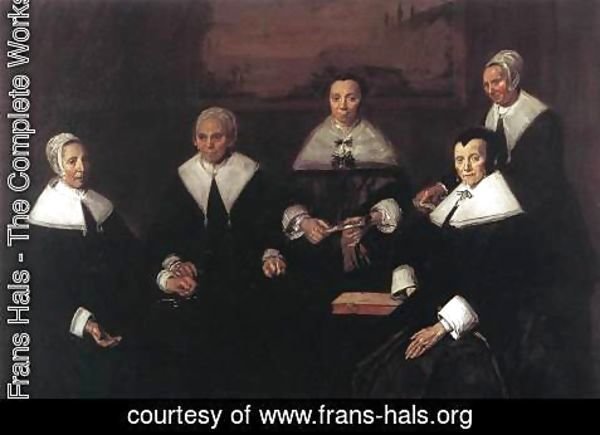 People often think that Hals 'threw' his works 'in one toss' (aus einem Guss) onto the canvas. Research of a technical and scientific nature has clarified that this impression is not correct. True, the odd work was largely put down without underdrawings or underpainting ('alla prima'), but most of the works were created in successive layers, as was customary at that time. Sometimes a drawing was made with chalk or paint on top of a grey or pink undercoat, and was then more or less filled in, in stages. It does seem that Hals usually applied his underpainting very loosely: he was a virtuoso from the beginning. This applies, of course, particularly to his somewhat later, mature works. Hals displayed tremendous daring, great courage and virtuosity, and had a great capacity to pull back his hands from the canvas, or panel, at the moment of the most telling statement. He didn't 'paint them to death', as many of his contemporaries did, in their great accuracy and diligence whether requested by their clients or not.

'An unusual manner of painting, all his own, surpassing almost everyone,' ('Een onghemeyne [ongewone] manier van schilderen, die hem eyghen is, by nae alle [iedereen] over-treft'), wrote his first biographer, Schrevelius, in the 17th century on Hals' painting methods. For that matter, schematic painting was not Hals' own idea (the approach already existed in 16th century Italy), and Hals was probably inspired by Flemish contemporaries, Rubens and Van Dyck, in his painting method.

As early as the 17th century, people were struck by the vitality of Frans Hals' portraits. For example, Haarlem resident Theodorus Schrevelius noted that Hals' works reflected 'such power and life' that the painter 'seems to challenge nature with his brush'. Centuries later Vincent van Gogh wrote to his brother Theo: 'What a joy it is to see a Frans Hals, how different it is from the paintings - so many of them - where everything is carefully smoothed out in the same manner.' Hals chose not to give a smooth finish to his painting, as most of his contemporaries did, but mimicked the vitality of his subject by using smears, lines, spots, large patches of color and hardly any details.

It was not until the 19th century that his technique had followers, particularly among the Impressionists. Pieces such as The Regentesses of the Old Men's Alms House and the civic guard paintings demonstrate this technique to the fullest. 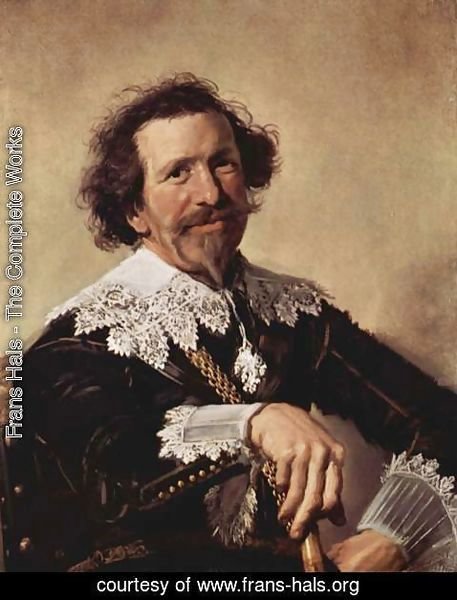 Hals' reputation waned after his death and for two centuries he was held in such poor esteem that some of his paintings, which are now among the proudest possessions of public galleries, were sold at auction for a few pounds or even shillings. The portrait of Johannes Acronius realized five shillings at the Enschede sale in 1786. The portrait of the man with the sword at the Liechtenstein gallery sold in 1800 for 4, 5s.

Starting at the middle of the 19th century his prestige rose again. With his rehabilitation in public esteem came the enormous rise in values, and, at the Secretan sale in 1889, the portrait of Pieter van de Broecke Danvers was bid up to 4,420, while in 1908 the National Gallery paid 25,000 for the large group from the collection of Lord Talbot de Malahide.

Hals' works have found their way to countless other cities all over the world and into museum collections. From the late 19th century, they were collected everywhere - from Antwerp to Toronto, and from London to New York. Many of his paintings were then sold to American collectors, who appreciated his uncritical attitude towards wealth and status.

A primary collection of his work is displayed in the Frans Hals Museum in Haarlem. (From Wikipedia)